Start receiving our Newsletters about Aviation Events, Places to Fly, Aviation Jobs and Videos!
Post our Flyer! Link to US!
* Add an Aviation Event!
* Add a Place to Fly!
* We Shoot Video!

It's a Long Way Down, isn't it? - Rod Machado
Psst! Psst! Come here. Come a little bit closer. I've got something I want to ask you, and I don't want anyone else to hear. Are you afraid of heights? It's probably embarrassing to admit it, but if you're like most other pilots, the answer is Yes. 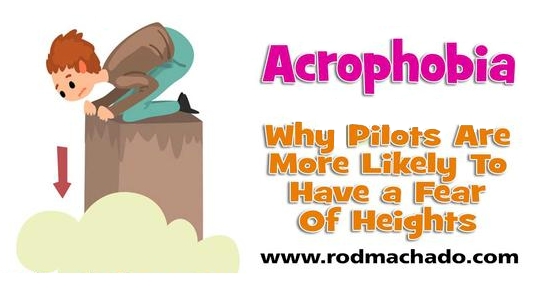 According to Chaytor Mason, a retired professor of aviation psychology at the University of Southern California, the rate of acrophobia is upwards of 90% in some of the pilot groups he's encountered. My own estimates indicate that the percentage of acrophobia in the general aviation pilot population is far, far higher than in the nonpilot population (where it is 6% to 10%). What's going on here? Is it possible flying attracts only those poor souls who enjoy the torment of an altitude-anxiety love-hate relationship? Or does flying itself breed acrophobia? Let's look a little further (not higher) for the answer.

Click HERE for the rest of the Article!
FunPlacesToFly.com is an Amazon Associate